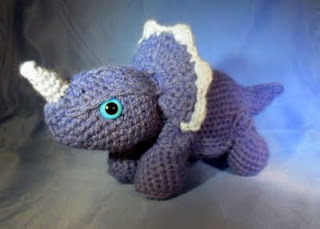 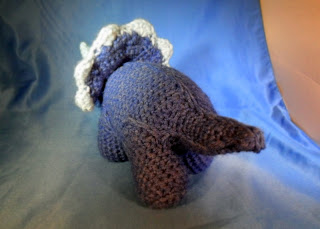 I made a few adjustments to a pattern I bought from WolfDreamer on Etsy. The main change was just ornamental surface stitching to accent the bodylines and leg joins. Also I sharpened the nose into a beak and put the legs in more of a walking pose. Little things that adjust the personality. I wanted him to seem a bit rough and tumble. I've been carrying him around all weekend and feel a bit attached. Before I assembled his parts I had a lot of fun placing them all over. I toyed with the idea of giving him only front legs and tying red yarn off the back end of his body, like battle damage. Maybe next time... :)
Also, I thought he was going to be an Einiosaurus, but I didn't get the hood right.
I learned to knit a few years ago, but have really taken a shine to crochet. It's much easier as far as I'm concerned and you can make crazy fun random things quickly.