It can be hard to invent new things. Sometimes you just find yourself stuck. I have a lot of exercises that can help break out of this. One of my favorites is shape games. Any shapes will do. Below I've drawn a page of simple line shapes. These could be anything though. Someone suggested placing tracing paper over magazines and using all those shapes and values to draw on. I think that is a fantastic idea! 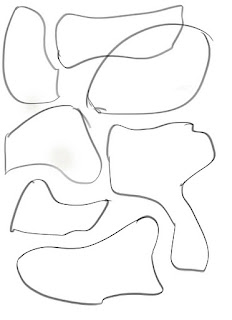 Begin filling the page with an idea in mind. Horses, houses, rockets, samurai, rocket samurai... I went with the concept of a horse in my mind, because they are challenging and I like them. You'll notice yourself placing details in the shapes you put down, but try breaking out of that and also using the space between shapes and also merging shapes together. Hopefully you just ended up with a silly mess and only spent a minute or two drawing down ideas. Don't worry about appearances. The feeling and idea is most important right now. Don't be overly concerned with rendering or accuracy. 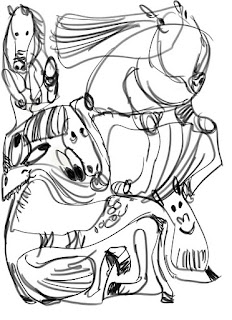 Check out that messy page. Anything stick out? Are there any drawings you find yourself responding to? Anything making you smile inside? I really like the little guy on the bottom left. He's got a good feeling coming off of him. Since I'm responding fairly strongly I decided to isolate him from the herd. 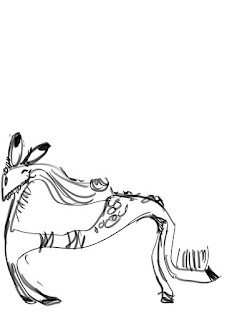 I just squished him up in the corner of the page as reference. Now I'm going to use that drawing as a jumping off point to refine the idea a bit. I feel like this guy looks super happy, maybe slightly proud. I begin a new drawing and push the shape into a proudly held head on a swooping body, trying to exaggerate more. I think the high rear end is funny and keep that, also making it heavier so I feel it more visually. I'm starting to really like this guy, but think I can push it further. I take that second drawing and squish him up in the top right.

I start over again. Now I'm trying to exaggerate that second drawing a lot more if possible. It's better to go too far than too short. You can always go back, but if you can't reach further then you're kinda stuck where you are. 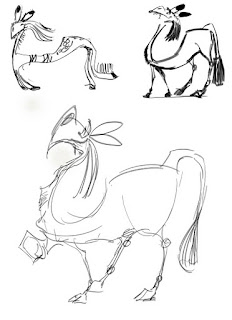 I think I'm really starting to like this guy. He seems like a very proud animal, maybe he thinks he is beautiful. I begin pushing away from broad feelings and more towards snippits of story and defined personality traits.

I put my sketches on a layer and turn down the opacity. I throw a layer on top and begin drawing in specific details around my sketch. I think about texture and temperature and sounds and smells and movements. Even if I'm not really drawing down all of those things, if I feel them as I draw a little more energy is retained in the drawing. Like I'm drawing the moment before all of that happens. 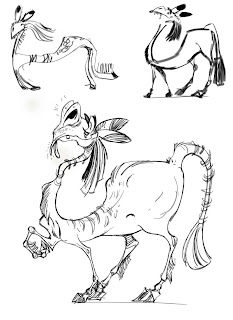 I colored a little bit during the demo, but was very unhappy with what I ended up with. I think I will color this horsey monster later and talk through that too.
Posted by Katy Hargrove at 6:42 PM

Thanks for talking to me on Satuday at CTNX. I read Sam's advice on lighting and it is useful, I hope to paint something, or possibly fix one of my old paintings and give it some bounce light once I am finished getting sketching out of my system. ;)

This seems like a really fun idea for those times when you are stuck and dont know what to draw. Love your proud horsey thing you ended up with and your sketchbook! Super insperational! Thanks a bunch again! :)

Thanks for posting this! I was kind of bummed about missing your demo at CTN, so glad to see you post this.

Very cool and fun stuff, and I'm definitely going to be trying this exercise!

great meeting you over the weekend, I love the sketchbook and the sketch you did of the tiger giraffe, you actually inspired me to try a version so if you have time stop by my blog and you can see my WIP,, I shall now be a regular to your blog.

Jennifer: I'm glad you tracked his tutorials down. I'm in love with Sam's work! His process is so thoughtful and eye opening.

One of the things to keep in mind also, is that even though an exercise like this is often just for fun, it should still feel that way when you work. It's hard not to get stuck in the idea of producing something polished vs. keeping the energy and uniqueness of the sketch throughout. I get caught up in that a lot at work, but strive to push for that freedom of creation.

Xuco: Yeah, I wish the schedule hadn't got mixed up. A few of my friends saw it though so I was happy about that. Kinda scary doing demos, but fun all the same.

G1toons: Leon, I love the tiger giraffe you started on! Great weight and personality. Would love to see him fully rendered. :)

Katy - it was great spending time with you at CTNx. Thanks so much for coming and sharing your talent. ~Tina Price founder CTN animation eXpo